UMPIRING IS A JOB.  THERE ARE EXPECTATIONS - 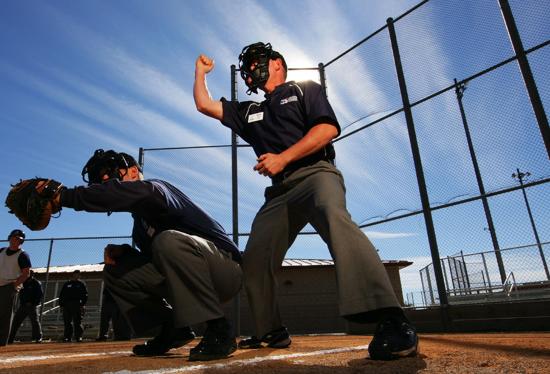 Runner Passes Another Runner on the Bases

Full video of a batter running past another baserunner.

Please review this video on questions concerning the infield fly.

Please review for any questions on obstruction and interference.

PLEASE WATCH. THIS IS THE CRAZIEST FARI BALL YOU WOULD EVER SEE.

1.  Runner interference.  The runner has to avoid contact with the fielder.  The runner does not have the right away to the base line.  If he makes contact with a fielder trying to make a play on the ball the runner is out.  The batter is awarded first base and all other runners return to their previous base.

2.  If a base runner touches or passes a baserunner in front of them the back baserunner is called out. The play is dead and all other runners must go back to their previously obtained base.  This rule also applies to two baserunners standing on one base together.  If both runners are tagged only the back base runner is out.

4.  FAIR OF FOUL?  - The ball determines fair or foul.  If a ball is touched by a defensive player it does not matter where their body is positioned.  It's all about the ball.  NEVER VERBALLY CALL A BALL FAIR.  ONLY POINT.  ONLY VERBAL ON A FOUL BALL.

5.  Announce all starting times in pool play to both coaches after the first pitch.  Get confirmation from the dugouts that they agree.  Also announce to the coaches when the game hits 1 hour and 30 minutes.  No new inning after 1:40.

7.  Catcher's Interference - When the catcher's glove hits the bat of a swinging batter the ball is live only to benefit the offense.  If nothing happens or the hitter is retired by the defense the batter is given first base.  All other runners only advance if forced.

8.  A batted ball hits an umpire -  If the umpire is in front of the infielders the ball is dead.  Each runner moves up one base if forced.  The batter is awarded first base.  If you are behind the defense the ball is live and the play goes on as normal.

10.  If a throw by a defensive player leaves the playing field all runners are awarded one base.

11.  A batted ball hits a base runner.  The play is live until the benefit of the defense is lost.  The runner is out,  all other runners go back to their previous base and the batter is awarded first base.

12.  Slide Rule - All players must slide directly into a base.  No rolling.  No blocks.  No pop up slides on a double play.  No running over the catcher.  Head first sliding is allowed.  On a double play at second base both the runner and batter are out.

13.  Foul tip third strike - If he ball is hit and goes directly into the catchers glove the play is live.  If a runners is stealing the catcher can make a play on the runner on a foul tip.  If the catcher drops a foul tip the ball is dead and strike is awarded to the batter.

14.  Defensive obstruction - If a defensive player obstructs a base runner from advancing place your hand in the air and call "obstruction". The play carries on only to the advantage of the offense.  All runners are awarded the last base obtained and then your judgement comes into play.  If you rule the first basemen obstructed a batter and the runner makes it safely to second base the runner is safe at second.  If in your judgement the runner would've made it to third base you can award them third base.  Judgement only comes into play on the obstructed runner.

15. Home plate positioning - Always place yourself over the shoulder of the catcher on the batters side.  This is to protect yourself from foul balls.

17.  Tagging up - The base umpire has responsibility of the catch in the outfield.  The plate umpire is responsible for watching all tag ups on the bases.  If the ball goes dead then the defense must wait for the ball to come back into play to appeal the play.  If the ball is in play the entire time they can appeal at any time.  The call is on the home plate umpire.  Please watch the baserunners.

19.  INFIELD FLY - Only happens with runners on first and second or bases loaded and less than two out.  If the infielder is camped under a fly ball in the general area of the infield, "Infield fly" will be call.  Be sure the infielder is camped under the ball and will make a catch on the ball is going to happen 99% of the time.   If a defensive player is running towards a spot and is not camped don't call infield fly.  If the ball is dropped, all baserunners may advance at their own risk without tagging up.  If they're safe or out at the base they're trying to obtain the call stands.  The batter is out in all instances listed above.  The best way to be prepared for an infield fly is think about it before the play happens. Know where the baserunners are and how many outs there are.

20.  Equipment - In Valley Springs the equipment will be located in the box under the press box.  At Aspen the equipment is located under the grandstand in the cabinet located on the south side of the area.  We highly suggest all plate umpires wear a cup.  It's your call.....NEVER UMPIRE A GAME WIHTOUT A CLICKER.  Always have a clicker.  Keeping the count is one less item you have to think about if you keep and clicker and use it.

23.  Signing up for games - Please see the two links below.  Information is provided for league and tournament games.

24.  Payment - All tournament games are paid for on the spot when your assignment has finished.  All league games for the previous week will be paid out the following Monday.

Please sign up for league games through the DIBS page on our website.  PLEASE FOLLOW THE RULES FROM WEEK TO WEEK.  TWO GAMES UNTIL WEDNESDAY AT NOON.  ONCE WE HIT NOON ON WEDNESDAY SIGN UP FOR AS MANY AS YOU LIKE.  Each umpire needs to volunteer two games.  Please give every umpire the opportunity to volunteer.  Thank you.

13u umpires - You can sign up for league games on day one.  Work hard and learn.  Work with an older umpire and learn from our coaches.